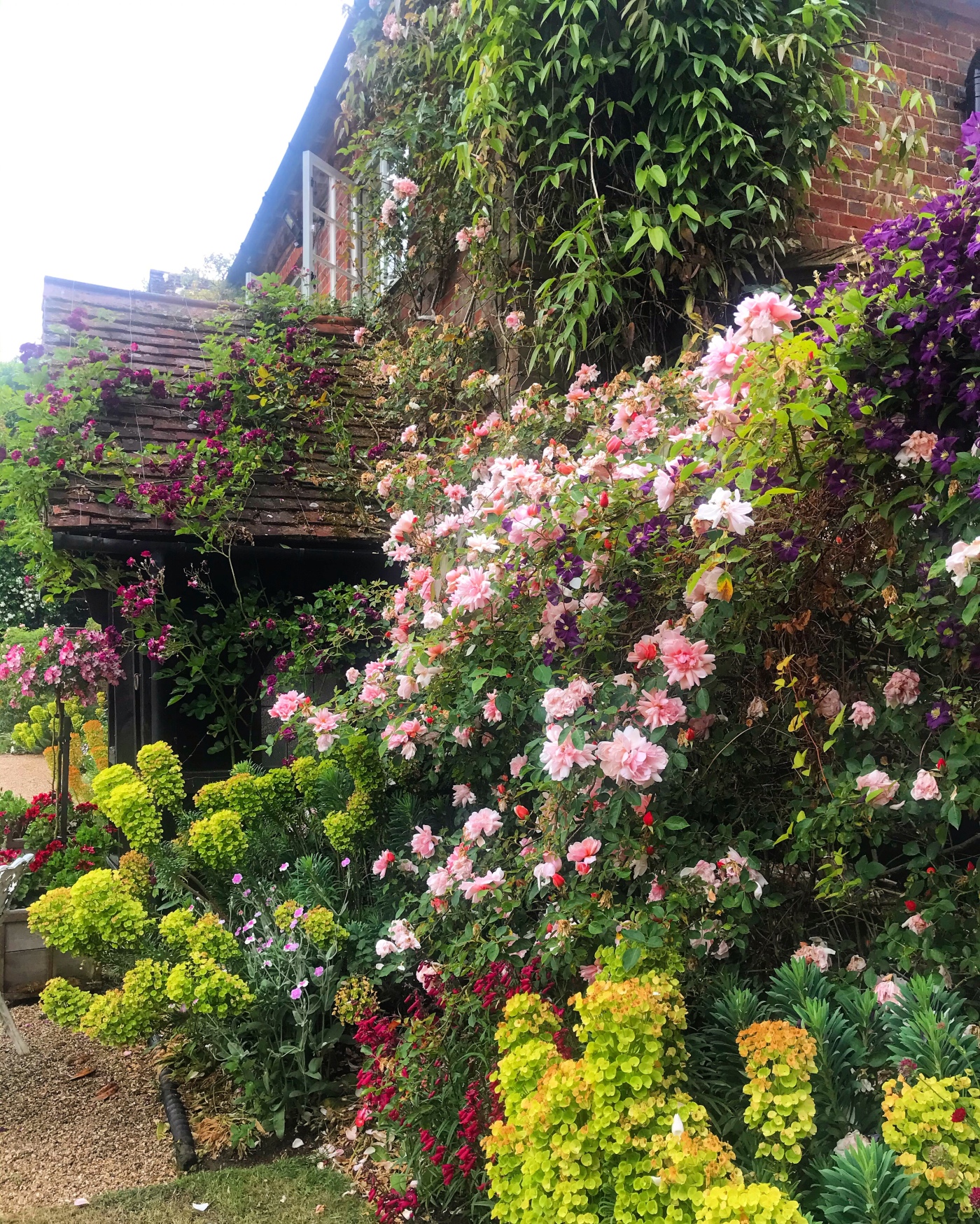 With gardens re-opening across England in recent weeks I have wasted no time in searching out new places to visit and the month of June has been one of discovery.

The National Gardens Scheme gives visitors unique access to private gardens across England and Wales and all monies raised go to a number of health and nursing charities including Marie Curie, Hospice UK, Macmillan Cancer Support and The Queen’s Nursing Institute. Other charities include Mind, Parkinson’s UK, The Carer’s Trust, Horatio’s Garden, Perennial and Maggie’s Centres. With all bookings being taken online, it has never been easier to find a garden near you through the website (ngs.org.uk).

I started off the month of June visiting two neighbouring gardens in Shackleford, Surrey. Norney Wood is an Arts and Crafts style house with a redesigned garden by Acres Wild Garden Design using Gertrude Jekyll’s style of garden as inspiration. The formal garden is laid out on two levels, with an immaculate lawn flanked with soft pink roses and lavender. To one side, a pleached lime avenue underplanted with hardy geranium stretches away from the house and the whole area is surrounded by mature trees.

A rectangular pool forms the focus of the lower part of the formal garden which is overlooked by the ‘Thunder House’ – a structure faithfully recreated in the style of Jekyll. These curiously named buildings are not (as some may think) an outside lavatory but were designed as a shelter from which one could observe passing thunderstorms. Jekyll’s own Thunder House is still standing in the garden at nearby Munstead Wood although I would imagine the surrounding trees were not there at the time of it being built and indeed those at Norney Wood may well inhibit the view of passing thunder clouds! Nonetheless, the Norney Wood Thunder House not only adds interest to the garden, it serves almost as a palatte cleanser between the upper and lower levels. Elsewhere in the garden is a wilder woodland area with a shady pool planted with Giant Gunnera and wet-loving plants and a treehouse used by the village school for outdoor learning.

What a delightful find! Dolphin House has a charming walled garden that was formerly the vegetable garden for nearby Aldro school. What makes the walled garden particularly special is the fact that it has a ‘crinkle crankle’ wall – a wavy wall built from a single row of bricks – the undulating curves making the wall stronger. The garden is thickly planted with generously deep beds and climbing roses adorn the walls. The owners have gardened here since 1993 and gradually made their mark on the garden, learning as they went along which plants were more suited to certain areas. The result is a pleasingly coherent garden surrounding a small orchard, with herbaceous perennials that complement one another. Mature shrubs and small trees nestle within borders which are dotted with rusted obelisks in preparation for taller perennials later in the season.

Another charming Surrey garden, Lower House has the prettiest facade, smothered in clematis and roses and a garden in which you can lose yourself. This is an immaculate and mature garden with a very interesting story. The owner revealed to me that a local resident had recently come across drawings by Gertrude Jekyll that they believed to be designs for the garden at Lower House. Much of it has disappeared but the Rose Walk is still there, with standard Ballerina roses underplanted with lavender and beside this, a rectangular lawn is laid out in the place that would have been the Nut Walk (a Jekyll staple).

The expansive lawn behind the house is divided with steps flanked with planters with the lower lawn (that was probably a tennis court in the earlier part of the 20th Century) which in turn leads down to a shady area. Beside the house, a neat box parterre containing iceberg roses looks like just the place to enjoy a quiet moment. Roses are everywhere – deepest pink ‘Chevy Chase’ scrambles up the back of the house and shaggy pale pink climber ‘Albertine’ appears several times, although other roses are so old that their names are lost in time. In the neat vegetable potager I was intrigued to discover some large-leaved tree cuttings which turned out to be Paulownia cuttings taken a few years ago – they had been so successful that a new avenue of Paulownia have been planted in front of the house where the yellow NGS flag flies proudly on open days.

My final June visit took me to the suburbs where I enjoyed a look around the garden at 15, The Avenue, Cheam. Designed by RHS Chelsea gold medallist, Marcus Barnett, this garden has been on my bucket list for visiting for quite some time and I was not disappointed.

The main garden is approached via a passageway to the side of the house where literally hundreds of hostas in pots are arranged which continue around to the back garden where they hug the length of the back facade. The rear garden has been laid out in a modern-day arts and crafts style taking into account varying levels. Each level of the garden is laid out as a different room with views through to the next area. Clever use of beech columns give tantalising glimpses of secret areas and mature white-stemmed silver birch trees which lend a secluded air. Owner Nigel reveals that he washes the bark each autumn with a mop to retain its ghostly white appearance. Beside the house, white hydrangeas froth beneath more birches and steps lead up to a seating area beside a modern outdoor garden room. A shady area with more hostas and tree ferns is overlooked by a gazebo beneath which a wooden table is adorned with potted pansies. A wide path leads up through the levels; ‘wide enough for two people to walk side by side with a gin and tonic in hand’.

Sculptures are dotted around, varying in size – smaller sculpture nearer the house. A focal point at the end of the main vista features a large metal hoop sitting amid frothy Verbena bonariensis. In the adjacent meadow area, a modern angular sculpture contrasts against soft grasses. A further beech avenue leads back down towards the house and I was amazed to discover that the seemingly large garden is actually only a third of an acre in size! This garden is testament to the vision of the owners and garden designer and is absolutely well worth a visit.