As a South East of England dweller, I’m accustomed to National Trust properties being over-run with visitors, car-parks bursting at the seams and having to wait for a table in a tea room. Not so in quieter parts of England, such as Northamptonshire. It came as something of a surprise to note that Canons Ashby near Daventry doesn’t even appear to have an entrance booth to purchase a ticket or show a membership card – we had to enquire in the gift shop! …. although this could be due to the fact we parked on the road outside – yes- another amazing fact is that the area is so quiet you can leave your car nearby & walk.

Anyway, on to the property & garden. Dating back to Elizabethan times, the Grade I listed house is built from the remains of a mediaeval priory, one of the first of the religious houses to be demolished during the dissolution of the monasteries. The house is still occupied by the Dryden family and open to the public.

The 18th century formal gardens that surround the house are approached by a gate overhung by a fig tree – at the time of our visit there were ripe figs literally dropping from the branches.

The main garden, also known as the Top Terrace, is laid out in a formal style, taking advantage of the sweeping vistas across the adjacent parkland. An impressive Cedar of Lebanon stands beside a smaller garden, the Green Court, where espalier pears were hanging heavily in the autumn sunlight whilst ferns languished in their mini stumpery on the shadier side of the garden.

A triumphant row of topiary yews lead the eye to the statue of the Shepherd Boy with quite a story behind it. The statue was erected by the Dryden family to remember a time during the Civil War when Lady Dryden, a Cromwell supporter, entertained Roundhead soldiers in the great kitchen of the house. The Shepherd Boy, posted as a lookout blew a warning of enemy approaching. The Roundheads took shelter in the nearby Priory church & a skirmish ensued with musket balls & shot being fired at the church – the marks can still be seen today! The Cavaliers decided to smoke out the Roundheads who had no choice but to surrender & were subsequently imprisoned in nearby Banbury, only to be later released. The poor shepherd boy lost his life for his efforts but remains in the memory of the family through his statue.

The Top Terrace leads seamlessly to the topiary studded Sundial Terrace which overlooks the fruit & vegetable terraces where heavily laden fruit trees are dotted around beside vegetable & picking beds bursting with late summer colour. Impressive Lion Gates at the foot of the terraces depict the lion & sphere of the family crest.

There is a small gift shop selling the usual National Trust paraphernalia & a tearoom in the old stables where you can sit outside in fine weather and share your refreshments with the resident free-range hens! 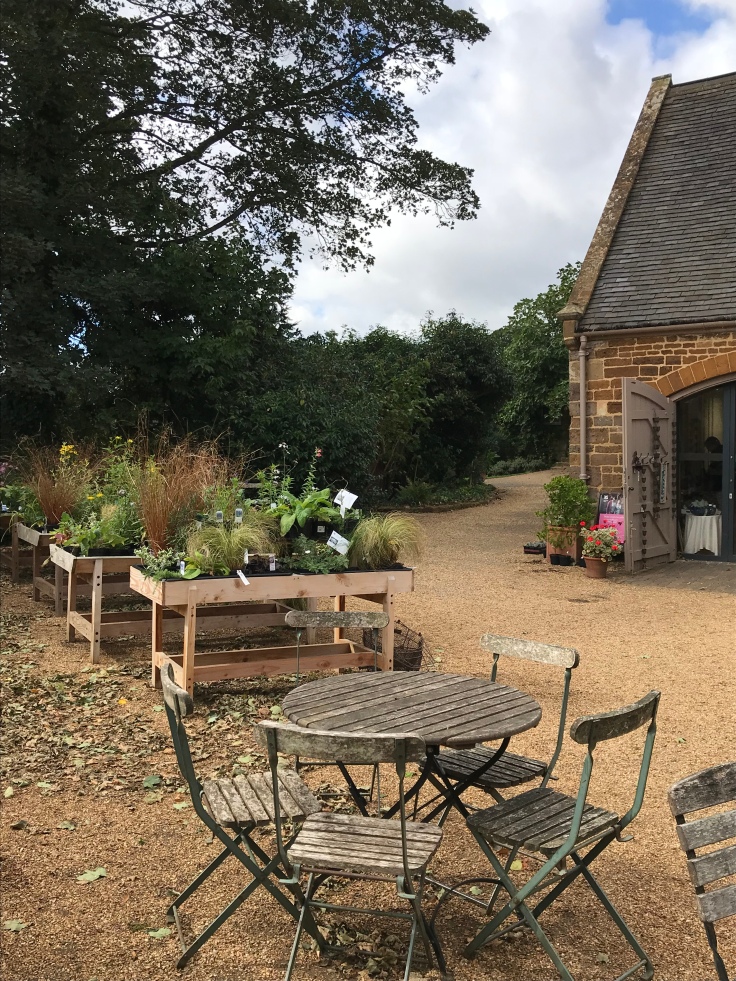