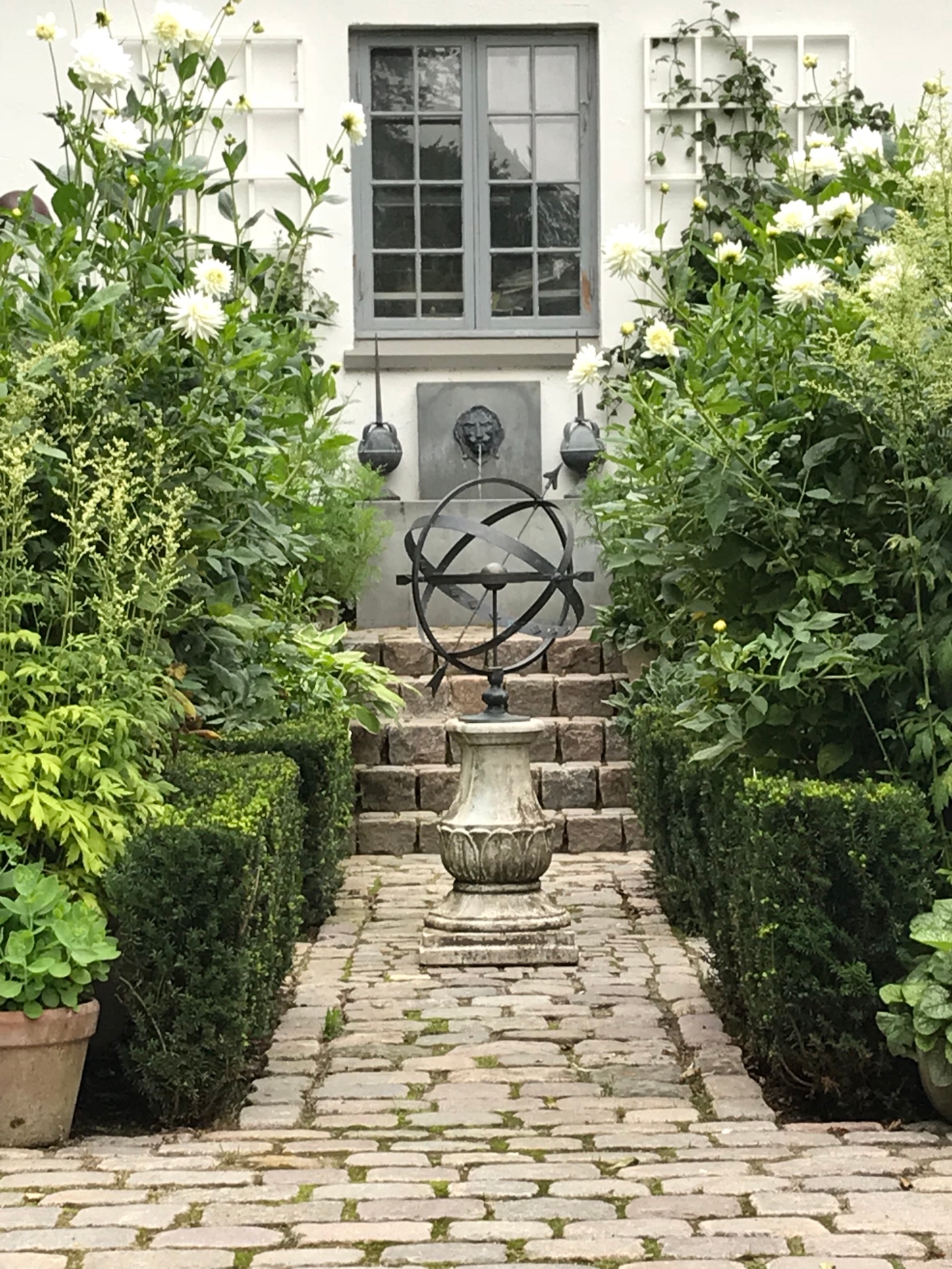 It was a great privilege to be invited to Denmark to visit the garden of celebrated gardener & publisher Claus Dalby. Situated in Risskov, the garden sits mainly to the front of the elegant 100 year old house where an explosion of colour at the end of the lime avenue beside the house invites you to investigate what lies beyond.

An Instagram celebrity, Claus has over 150,000 followers & has written, illustrated and published more 20 garden books. His blog, Klematis attracts a huge audience and in addition Claus invites fans to join his online gardening club.

Hugely influenced by florists, Claus colour themes his spring tulip and late summer dahlia displays, creating ‘borders’ from the hundreds of terracotta pots and various containers packed together. He cleverly combines flowers with pots of foliage such a heucheras, Japanese maples and even house plants. Containers filled with annuals grown from seed in Claus’s impressive greenhouses are added to the displays.

Beside the house, an apricot and dusty orange border is filled with not only dahlias but also asters and zinnias. Chocolatey dark red dahlias and hollyhocks are planted alongside pillar box red zinnias, dahlias and lobelia.

Claus calls his orange and deep purple/pink planting ‘The Kenzo borders’ – inspired by the colours he associates with the fashion house of the same name.

“Many people tell me I have introduced yellow to them” declares Claus. It is easy to see why this would be the case as the delightful lemon yellow dahlias, asters and nasturtiums combine delicately with white and shades of green in the formal sunken garden and beside the house.

The dahlias, arranged to the rear and sides of the house come as a dramatic and colourful surprise to the visitor after the looser and softer plantings of the front garden leading from the entrance. Here, shady paths and yew hedges create various garden rooms punctuated with formal water features. Airy purple thalictrum and white artemisia are set off by more structural shrubs such as budleijas and shade loving hydrangeas. Painterly splashes of colour in the form of old fashioned roses and lilies scent the air. “It would be so nice if the dahlias were also scented” muses Claus.

During my visit, Claus demonstrated his flower arranging skills, creating some beautiful bouquets in some of the many vases and containers he collects and displays in his conservatory studio.

Claus’s skill with colour and texture extends beyond the flower garden into the kitchen where he enjoys creating tempting and colourful salads which were brought to the table after firstly being photographed for his forthcoming book.

One thought on “The Danish garden of Claus Dalby”