Beyond Guildford, at the outermost edges of leafy Surrey lie the winding narrow lanes that lead to Vann, a 16th Century house sitting comfortably within its 5 acres of garden which are opened regularly for the National Gardens Scheme.

Dating back to the 16th Century, the expansive house has an Arts and Crafts flavour which is complemented by the garden, which was partly inspired by ideas from Gertrude Jekyll, whose notes on the water garden plantings can be found in the local museum at Godalming.

Overlooking farmland, the garden is composed of several ‘areas’.  The garden tour begins in the Old Garden where topiary flanked brick paths are bordered by beds and surrounded by the house on two sides. As our visit was in very early Spring there was little flowering other than helebores but in the summer months the beds flourish with cottage garden favourites such as irises, phlox, roses and penstemon.

The ‘South End’ garden mainly provides a route to the rear of the property and passes beside the house where a zingy Euphorbia bravely flourishes despite the colder temperatures.  Opposite, wide beds are buffered by a large hornbeam hedge within which a charming wooden gate leads to open fields.

The rear of the house is laid to lawn, dominated by a brick pergola, built in 1907 by W.D Caröe, a supporter of the Arts and Crafts movement  and who was responsible for extending and modifying the house and creating the garden.  Teas were being served in the shelter of the pergola but in the summer months this area is awash with colour including climbing roses and wisteria.  A splendid Vitis coignetiae (crimson glory vine) stretches across the this part of the house giving glorious autumnal richness.

The path winds on, through Rhododendron and Camellia towards the Jekyll water garden where a stream dissects the woodland valley where Narcissus, Anemone apennina, Helleborus and Fritillaria meleagris (snake’s head fritillary) flower in abundance. Little stone bridges cross the stream and the visitor can follow the meandering path in the steps of Gertrude Jekyll. 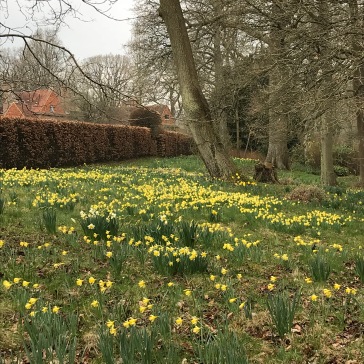 Daffodils with a view looking back towards the house

The path takes the visitor to large pond which overlooks the house on one side and open farmland beyond. 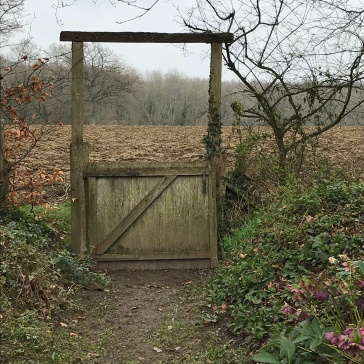 another view to the fields

One of my favourite views in this garden is the formal Yew Walk,  where a narrow canal is bordered by high yew hedges (planted in 1909) and planted with grasses and water loving ferns amidst clipped topiary balls.

Beyond the orchard, plant sales were occupying a number of visitors.  We wandered on to the Centenary Garden where each corner held a sheltered bench surrounded by clipped yew. These were made to a design by W.D Caröe and paved with upturned bottles set into concrete which commemorate the nearby Wealden glassworks which were excavated in 1931.

Further exploration revealed a crinkle-crankle wall, its generous loops providing shelter for espalier fruit trees and a river of cyclamen flowing beneath.  In late summer, a sea of pink nerines replace the splash of summer irises.

Onwards back towards the house, past vegetables and a greenhouse and through an archway to the Front Court where the most spectacular pink camellia was flowering against the weather-boarded walls.

Vann is open on selected days under the National Gardens Scheme.  See here for details of this year’s opening.