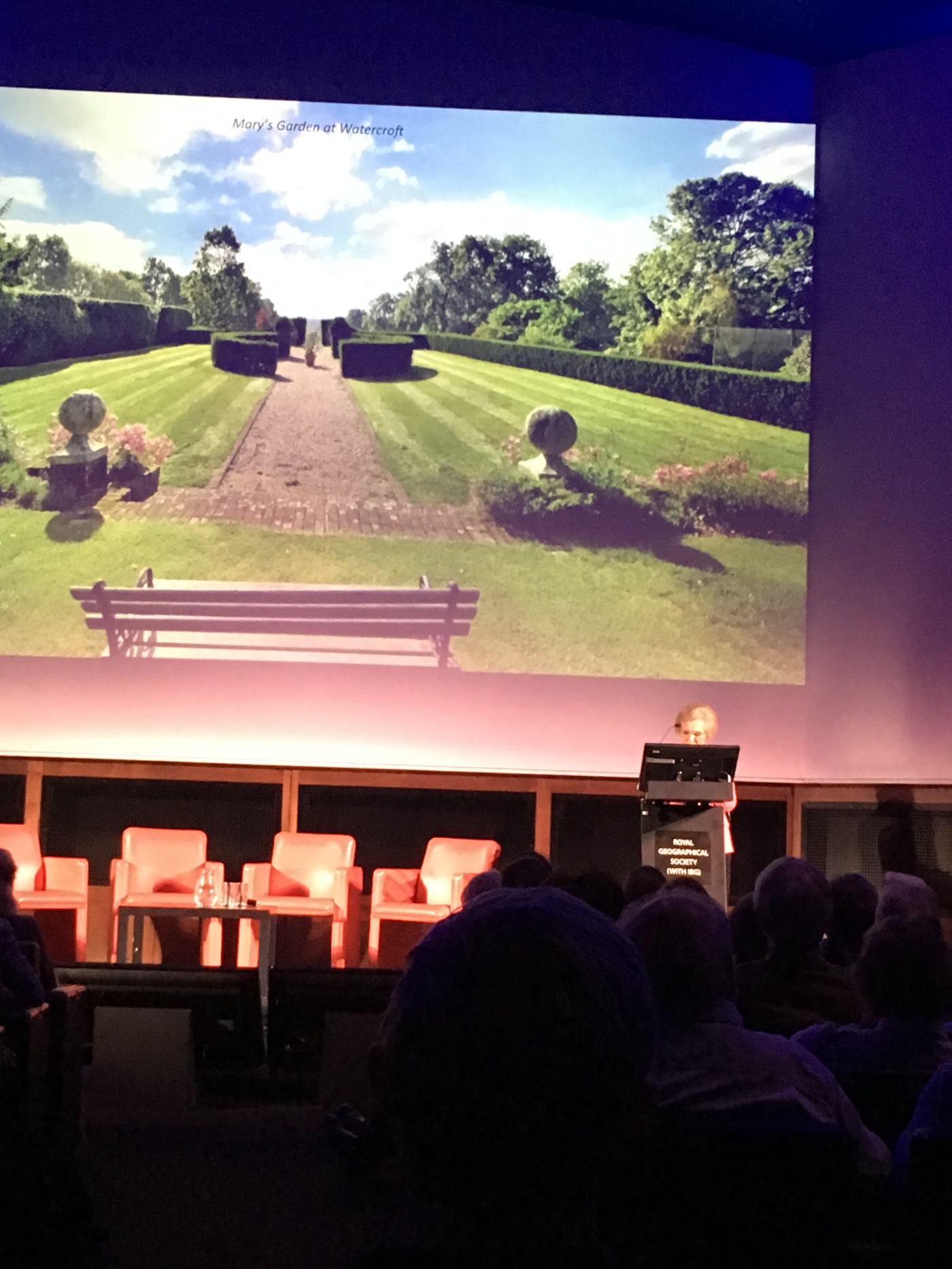 ” The NGS is responsible for making garden visiting a national pastime” announced George Plumptre, executive director of The National Garden Scheme as he introduced the annual lecture at the Royal Geographical Society, London where a packed hall waited in anticipation of the evening’s speakers.  In his introduction, Plumptre revealed that when the NGS first started in 1927 the only gardens open to the public were parks and when Hatfield House, the very first garden to open its gates to the public welcomed visitors in that year, a subsequent article revealed that ‘visitors could drive through the main gates in their motor-cars and walk freely around the grounds!’

The first speaker was President of the NGS, Mary Berry, a seasoned gardener who has opened her garden, Watercroft for the NGS for 25 years.  Mary recounted the first year she opened her garden where she received “wonderful help from the county team”.  Mary had excellent advice for the many garden owners at the lecture and helpfully gave tips on the most successful cakes to bake for teas.  Lemon drizzle and fruity tray-bake were the most popular cakes and she strictly told the audience “don’t give too much choice”.  Mary revealed that she had initially purchased 100 willow patterned cups and saucers for the teas which had come in very useful over the years.  “Garden opening is a huge effort but very rewarding” she said.

Mary Berry went on to describe her garden and share some of her most-loved flowers.  Having flowers to pick is a priority so starting in the spring, her garden is filled with Narcissus ‘Silver Chimes’ followed by tulips.  Sweet-peas are favourites and good for continual picking in addition to alstromeria.  Her favourite rose is Chandos Beauty, a blush coloured rose with highly scented blooms.  In addition to flowers, Mary grows herbs for the kitchen and happily gave tips on the best tarragon to plant (French, not Russian “it tastes like grass”) and garlic (elephant garlic – “much better”).  Ultimately, Mary uses her garden to relax and unwind.  “A garden is a great healer” she said.

The second speaker, Lord Ashbrook spoke of Arley Hall, his family home in Cheshire that has opened for the NGS for 90 years.  Speaking on the subject of opening for charity he remembered one day in the 1960s when fewer gardens were open to the public and 1800 visitors arrived in one day at which point Arley Hall “reached saturation point”.  Lord Ashbrook went on to recall another such day a decade later when, thrilled with number of visitors in the garden he asked a retired Arley Hall gardener “what do you think of this then?!” gesturing to the crowds.  “I never thought it would come to this” grumbled the old man.   Chatting to visitors has provided surprising entertainment and Lord Ashbrook remembered a time when one visitor commented “nice garden – does anyone live here?” and another occasion when he was mistaken for a gardener when a member of the public asked “how long have you worked in this garden?” followed by their shocked reply after discovering who he was “gosh, are you Lord Ashbrook?  I’ve never met a Lord before”.

Arley Hall is lucky to be not only staffed by gardeners but also by volunteers.  “Volunteering should indeed be applauded” Lord Ashbrook said.  Arley Hall opens to the public with one day a year being an ‘NGS day’.  “Our visitors are invariably charming” Lord Ashbrook commented.

The final speaker was well-known garden writer,  Stephen Lacey who fast-talked his way through the lecture with garden tips and hilarious anecdotes on garden visits as a journalist.  Lacey used to open his London garden for the NGS but there has been something of a lull since he hasn’t opened since 1989!  He  charmingly described his own garden as a “landscape of memories” with foliage tapestries and seasonal colour.  Lacey’s talk was peppered with photographs of his garden, one of which depicted a metal garden bench, the back being in the shape of a cobweb.  “You can’t get to the bench, it’s just there as an eyecatcher” he retorted.  Favourite plants include Cardiocrinum giganteum “I like plants like this, you don’t get bored with them” and ‘smouldering’ blue hostas.

“Garden visiting brings the shock of the new” Lacey announced before going on to explain that before the 1990s “you would be hard pushed to find anything termed as ‘contemporary’.”  He went on to explain that gardens such as Sussex Prairies brought naturalistic planting to the public eye before the fashion for grasses had really been acknowledged nationwide.  He described Nancy Lancaster as ‘the master of creating atmosphere’ when referring to her garden design at Kelmarsh Hall, Northamptonshire.  Another favourite is Broughton Castle “where borders are allowed to spill and climbing roses swoop from the walls”.

“Gardening encourages eccentricities” Lacey said before going on to reveal that in summer he can often be found at midnight “with a torch in my mouth and jam-jar in hand, knocking off vine weevils”.  He abhors overly neat gardens.  “Over-manicured gardens are a killer of atmosphere” he confirmed.    Looking ahead to the future, Stephen Lacey would like to see the return of ‘fiddly plantmanship’ and the return in popularity of specialist nurseries. “NGS gardens are fun to explore, rather like a rummage through a second-hand shop” he said.

The hour finished with a brief questions and answers session with all three speakers.  A few questions were rushed through, with one question not even being answered fully before George Plumptre called a close to the proceedings and everybody filed out, clutching their complimentary Investec toy zebras.