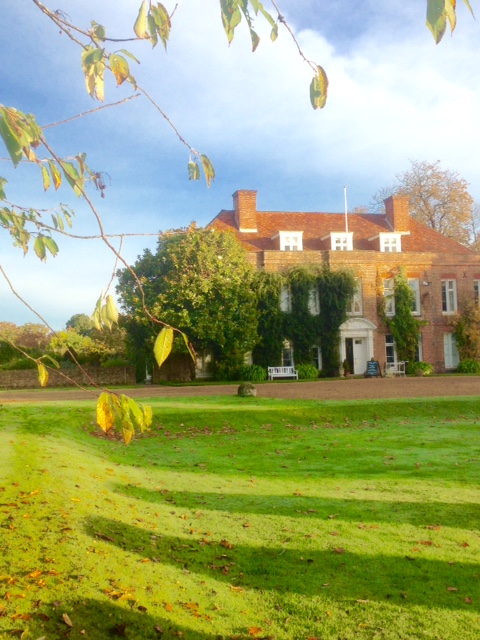 With a harsh winter forecast, the autumn colour is looking it’s best in late October and taking advantage of a sunny weekend in late October we decided to head once again to Kent.

Hole Park , a privately owned estate situated in the high Kentish Weald between  Rolvenden and Cranbrook is a quintessential Elizabethan style English country house set amist manicured grounds with far reaching views across parkland. A sweeping  gravelled drive leads to the front of the house (home to Edward and Clare Barham and their family and therefore not open to the public) which overlooks a rectangular fountain pool resplendent with matching dolphin and cherub fountains delicately adding to the grandeur of the surroundings.  In the distance  a stone obelisk can be seen highlighted by a window cut into the trees behind.

The formal gardens are dominated by magnificent yew hedging and mature oaks.  A series of rooms created with yew offer interesting surprises with new discoveries around every corner revealing smaller gardens, statues and seating areas.  A statue of particular note is ‘The Eagle Slayer’ dominating the end of the long borders.  This statue was  commissioned for the Great Exhibition and a replica can be seen in the Museum of Childhood in  London. The millenium garden beside the house is a neat contrast to the expansive tropical border nearby, perfect in late summer with clashing bright colours of dahlias contrasting with salvias, daturas, gazanias and surprisingly, banana plants and enormous pumpkins!

MEMORIAL GARDEN IN HONOUR OF A FAMILY RELATIVE

At the rear of the house lies the memorial garden created in memory of Wilfrid Barham, a relative of the owner who lost his life at Ypres in 1915.  Great iron gates, designed by W D Caroe feature  Wilfrid Barham’s initials and the dragon insignia of The Buffs, the East Kent Regiment.  At the time of our visit, it was a little over 100 years since Wilfrid Barham’s death, and a poppy wreath had been placed on the gates.

Beyond the formal gardens, the charmingly old-fashioned ‘Policy’ area is planted with spring bulbs, heathers and magnolias and dotted with great stones sourced from Westmorland.  I would imagine in the 1920s this garden would have been the height of horticultural fashion and it is so nice that the area has been retained rather than removed due to it being no longer in vogue.

Further into the valley lies the woodland area, famed for bluebells and azaleas in the Spring.  Autumn colour is provided by a variety of maple trees and paths lead through the woodland, taking in oaks and an enormous Wellingtonia Redwood, planted in 1928.  Great gunneras are planted beside the dell pond and in another spot, surrounded by a circle of birch, sits an ancient vertical stone, ploughed up elsewhere on the estate and thought to be part of an iron age stone circle.  I couldn’t help but think that this stone would be better placed on open ground, so that should its companions be discovered at a later date they could be reunited and reformed in a position more suited to their original intention.

THE ALL IMPORTANT TEAS

Hole Park is open on selected days throughout the year and is a supporter of the NGS.  Teas and light lunches are served by cheery staff in the former stableyard.  Do not be surprised to find one of the family labradors joining you at your table!

THE HOLE PARK BLUE AGAPANTHUS – A SOUVENIR TO TAKE HOME

A small number of plants are available to purchase, including Agapanthus Hole Park Blue.  This larger than usual variety was found thriving at Hole Park having been planted in the 1920s.  At 4 feet tall with a profusion of late flowering dark blue flowers, it is a recognised variety and flowers across the gardens in beds and containers.

With so many people visiting gardens across the region, Hole Park felt like an undiscovered gem in comparison to Sheffield Park which we visited later the same day.

TWO GARDENS IN A DAY!  ONWARDS TO SHEFFIELD PARK

What a contrast in visitor numbers!  At Hole Park we felt as though we had the garden to ourselves, whilst at Sheffield Park we were amongst perhaps thousands of day trippers enjoying the autumn sunshine.  Photographers jostled for a place to capture the views and there were people literally everywhere.  The overflowing car park and queues of parked cars dangerously lining the approach roads should have been warning enough not to continue with our visit, but undeterred, we enjoyed the spectacular colour and planting of this Capability Brown landscape.  Despite the National Trust staff admitting that they had predicted a record breaking day for visitor numbers, the cafe (for which we queued for half an hour) had run out of sandwiches by 2pm and the main toilets had been closed for some unknown reason.  All the more reason to visit Hole Park instead, I feel!!