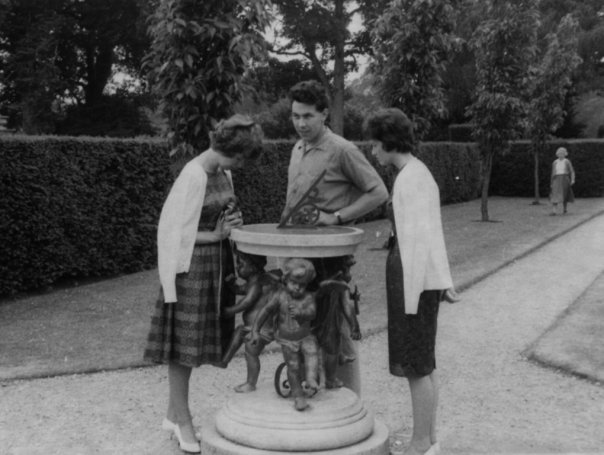 My ‘local’ and most loved National Trust property has to be the glorious Polesden Lacey, a Regency Villa set on the edge of the North Downs and host to many Edwardian house parties and even a Royal honeymoon, latterly hosting the more mundane masses of the general public but still wearing it’s enchanting beauty elegantly.

Polesden Lacey’s address and postcode is Dorking, although it does, in fact, lie closer to the postal town of Leatherhead.  The Dorking address can be blamed on the late Mrs Ronald Greville, the Edwardian society hostess of the aforementioned house parties, who now lies in state in the glorious gardens surrounding the property.  The royal honeymoon, incidentally, was that of George VI and Queen Elizabeth, the Queen mother, who declared ‘this is a delicious house’ – she was right of course, although I am slightly biased.

EDWARDIAN SPLENDOUR AND A RIOT OF ROSES

The house itself is built of mellow stone and overlooks sweeping views of the Surrey Hills, with gently sloping lawns (where croquet can still be played), tree avenues, the delightfully wide herbaceous border, secluded areas including the winter garden and the much loved walled rose garden (formerly the walled kitchen garden but transformed during Mrs Greville’s lifetime into a rose garden).  This area features an abundance of scented pastel coloured roses, some rambling over pergolas, with  shrub roses, box and lavender hedges in the surrounding borders.

A MEMORIAL TO FAITHFUL FRIENDS

Hidden amongst shrubbery is the dog’s graveyard, where Mrs Greville’s much adored canine companions lie beneath their own headstones, and beyond are paths through the formal gardens to a thatched bridge (haunted, apparently by a ghostly robed figure), which crosses the sunken farm road and leads to the former vegetable garden, now planted with cherry trees and featuring an original summerhouse.

A yew walkway to the east of the property is also reputed to be haunted, and beyond can be found a grass amphitheatre where summer productions take place.  A less visited part of the garden is the rockery, an area which has recently having undergone some renovation. Beside the rockery can be found a stumpery, newly planted with tree ferns.  As a child, I was always delighted to play in the ancient stone bath set at the foot of a nearby smaller garden, which again is less visited but all the more exciting a find!  I’m not certain small children are allowed to play in the bath these days though!

NEARBY WALKS IN THE GLORIOUS COUNTRYSIDE

The area caters well for dog walkers and local paths are well signposted, but do bring wellies as some of these paths are green lanes and bridlepaths, so do not be surprised to come across a multitude of riders – on horseback or motorbike.

A visit to Polesden Lacey would not be complete without a tour of the house, open during summer months, where the formal ground floor rooms can be seen with collections of paintings and ceramics.  The house is presented as it would have been in Mrs Greville’s day, and personal artifacts are displayed including photographs of Polesden Lacey in its Edwardian splendour.

AND ON TO THE TEA ROOM

Of course the highlight of most visits to such properties is a visit to the tearoom and Polesden does not disappoint, being aesthetically housed in the former stableyard.  There is also a plant and gift shop with helpful volunteers – you will struggle to leave empty handed.

BUT BEWARE THE NUMBER OF VISITORS

A downside of Polesden Lacey is the vast amounts of tourist traffic it brings.  In summer months the narrow roads leading to the property are jam packed with day trippers and the foot paths and bridlepaths are so busy it can feel positively suburban with all the human traffic.  However, do not let this deter your enjoyment.  Polesden is not known as the ‘most popular National Trust property in the south east’ for nothing!

Subnote:  The photograph is circa 1960 and features my parents in the walled garden at Polesden Lacey.